"The oxytocin receptor, also known as OXTR, is a protein which functions as receptor for the hormone and neurotransmitter oxytocin. In humans, the oxytocin receptor is encoded by the OXTR gene which has been localized to human chromosome 3p25." - Wikipedia.

"There was synthesis of both OT and the oxytocin receptor (OTR) within the testis, and both were markedly expressed within the Leydig cells. Expression of OT or neurophysin does not appear to be significant in the epididymis, though there appears to be synthesis of the receptor in some peritubular muscle cells of the epididymis and in the vas deferens. Receptors appear to be present in the myoid cells encompassing the glandular lobules and are presumably able to respond to systemic OT. " - Pubmed.

"The asymmetry within the abdominal cavity caused by the liver typically results in the right kidney being slightly lower than the left, and left kidney being located slightly more medial than the right." - Boundless Anatomy and Physiology.

"The kidneys are paired retroperitoneal structures that are normally located between the transverse processes of T12-L3 vertebrae, with the left kidney typically somewhat more superior in position than the right. The upper poles are normally oriented more medially and posteriorly than the lower poles." - Medscape. 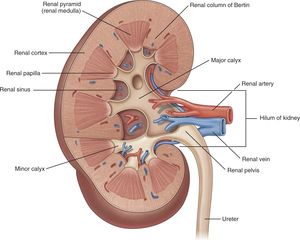 "The renal hilum (Latin: hilum renale) or renal pedicle is the hilum of the kidney, that is, its recessed central fissure where its vessels, nerves and ureter pass. The medial border of the kidney is concave in the center and convex toward either extremity; it is directed forward and a little downward. Its central part presents a deep longitudinal fissure, bounded by prominent overhanging anterior and posterior lips. This fissure is a hilum that transmits the vessels, nerves, and ureter. From anterior to posterior, the renal vein exits, the renal artery enters, and the renal pelvis exits the kidney."

"The mesonephric duct (also known as Wolffian duct) is a paired organ found in mammals including humans during embryogenesis. Wolffian structures are male urogenital structures that include the epididymis, vas deferens, and seminal vesicles that differentiate from this structure. In a male, it develops into a system of connected organs between the efferent ducts of the testis and the prostate, namely the epididymis, the vas deferens, and the seminal vesicle. The prostate forms from the urogenital sinus and the efferent ducts form from the mesonephric tubules. Precursor of the mesonephric duct is the intermediate mesoderm." - Wikipedia

"Biological hazards, also known as biohazards, refer to biological substances that pose a threat to the health of living organisms, primarily that of humans. This can include medical waste or samples of a microorganism, virus or toxin (from a biological source) that can affect human health. " - Wikipedia.

There are Five Levels of Empathy: (Truax and Carkhuff 1967 Communication Scale)

"Prior to the physical stimulation, comes sexual desire. Largely mediated by emotion through the limbic system, activation of the amygdala can trigger penile erection, sexual feelings,(Georgiadis and Holstege, 2005) sensations of extreme pleasure (Olds and Milner, 1954), memories of sexual intercourse (Gloor, 1986), as well as ovulation, uterine contractions, and orgasm."

"Input travels from the basolateral nuclei of the amygdala along the amygdalofugal pathway to the ventral striatum, made up of the nucleus accumbens, putamen and parts of the caudate nucleus. The nucleus accumbens plays a role in pleasure and reward due to a large large of dopaminergic neurons from the VTA (ventral tegmental area)." - UNSW.

"The reproductive organs are developed from the intermediate mesoderm. The permanent organs of the adult are preceded by a set of structures which are purely embryonic, and which with the exception of the ducts disappear almost entirely before the end of fetal life. These embryonic structures are the Wolffian and Müllerian ducts, also known as mesonephric and paramesonephric ducts, respectively. The Wolffian duct remains as the duct in males, and the Müllerian as that of the female." - Wikipedia.

"The corpora cavernosa of the penis or clitoris and of the urethra arise from the mesodermal tissue in the phallus; they are at first dense structures, but later vascular spaces appear in them, and they gradually become cavernous." - Wikipedia.

"The tunica albuginea is also the fibrous covering of the testis. It is covered by the tunica vaginalis, except at the points of attachment of the epididymis to the testis, and along its posterior border, where the spermatic vessels enter the gland." - Wikipedia

"Tunica albuginea is also found on the surface of the ovary, where this tissue is much condensed, and forms a layer." - Wikipedia

"One of the most important roles of AVP (ADH=AVP=Vasopressin) is to regulate the body's retention of water; it is released when the body is dehydrated and causes the kidneys to conserve water, thus concentrating the urine and reducing urine volume."

"Physiologically, erection is triggered by the parasympathetic division of the autonomic nervous system (ANS), causing nitric oxide (a vasodilator) levels to rise in the trabecular arteries and smooth muscle of the penis. The arteries dilate causing the corpora cavernosa of the penis (and to a lesser extent the corpora spongiosum) to fill with blood; simultaneously the ischiocavernosus and bulbospongiosus muscles compress the veins of the corpora cavernosa restricting the egress and circulation of this blood. Erection subsides when parasympathetic activity reduces to baseline." - Wikipedia

"In the presence of mechanical stimulation, erection is initiated by the parasympathetic division of the autonomic nervous system (ANS) with minimal input from the central nervous system. Parasympathetic branches extend from the sacral plexus into the arteries supplying the erectile tissue; upon stimulation, these nerve branches release acetylcholine, which, in turn causes release of nitric oxide from endothelial cells in the trabecular arteries. Nitric oxide diffuses to the smooth muscle of the arteries (called trabecular smooth muscle), acting as a vasodilating agent. The arteries dilate, filling the corpora spongiosum and cavernosa with blood. The ischiocavernosus and bulbospongiosus muscles also compress the veins of the corpora cavernosa, limiting the venous drainage of blood.Erection subsides when parasympathetic stimulation is discontinued; baseline stimulation from the sympathetic division of the ANS causes constriction of the penile arteries, forcing blood out of the erectile tissue"

"A penis which is partly, but not fully, erect is sometimes known as a semi-erection (clinically: partial tumescence); a penis which is not erect is typically referred to as being flaccid, or soft." - Wikipedia 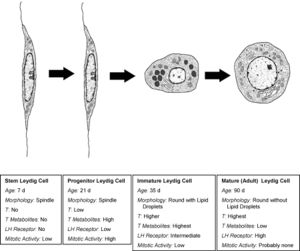 "Osmolality of blood increases with dehydration and decreases with overhydration. In normal people, increased osmolarity in the blood will stimulate secretion of antidiuretic hormone (ADH). This will result in increased water reabsorption, more concentrated urine, and less concentrated blood plasma. A low serum osmolality will suppress the release of ADH, resulting in decreased water reabsorption and more concentrated plasma." - Wikipedia

Too much isotonic drink may cause:

"A decreasing parasympathetic innervation leads to the predominance of phosphodiesterase type 5 (PDE-5), which interrupts the signal transduction cascade. The concentration of cGMP decreases and the smooth muscle cells contract."

A) Round ligament : Anterior to fallopian tubes, cross external iliac vessels, enter the internal inguinal ring, insert in labia majora. Sampson's artery (branch of uterine artery run along this Round ligament)
B) Broad ligament : Double reflection of peritoneum (it drapes over the round ligaments). Cardinal ligament lies at the base of this Broad ligament.
C) Uterosacral ligament: Minor cervical support. Location is from upper posterior cervix - around rectum (bilaterally) - fan out to attach to 1-5th sacral vertebrae (thus : Utero-Sacral ligament)

"The reproductive organs are developed from the intermediate mesoderm. The permanent organs of the adult are preceded by a set of structures which are purely embryonic, and which with the exception of the ducts disappear almost entirely before the end of fetal life. These embryonic structures are the Wolffian and Müllerian ducts, also known as mesonephric and paramesonephric ducts, respectively. The Wolffian duct remains as the duct in males, and the Müllerian as that of the female." - Wikipedia.

"Spermatozoa formed in the testis enter the caput epididymis, progress to the corpus, and finally reach the cauda region, where they are stored. Sperm entering the caput epididymis are incomplete—they lack the ability to swim forward (motility) and to fertilize an egg. It stores the sperm for 2–3 months. During their transit in the epididymis, sperm undergo maturation processes necessary for them to acquire these functions." - Wikipedia 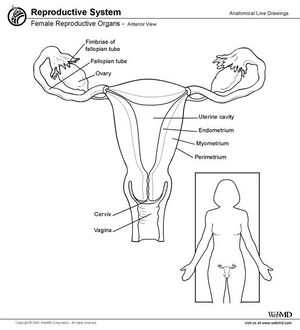 "The secondary oocyte is caught by the fimbriated end and travels to the ampulla of the uterine tube where typically the sperm are met and fertilization occurs." - Wikipedia