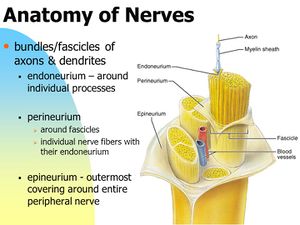 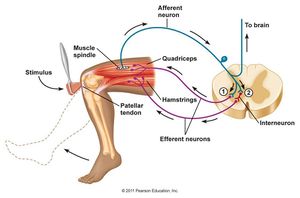 Basically, the nervous system is made up of cells that are able to communicate with each other. A huge amount of communication takes place between a countless number of these special cells. This complex communication is what allows us to think, sense, and control our bodies.

Messages sent between these cells are called impulses. The impulses are "electrical" but not like electrical wires. Instead, impulses are made using ionic imbalances (also called membrane potentials) that are created using sodium-potassium pumps that maintain a resting potential of -70mV. You can think of these impulses (aka action potentials) as small waves that flow between cells on narrow rivers.

Organization of the Nervous System[edit]

Ganglia
regions of gray matter in the PNS.

Some people remember these using mnemonics like "Efferent = Exit from brain" and "Afferent = Away from receptor", but these can be confusing. So just remember that afferent is "in" and efferent is "out".

Cells of the Nervous System[edit]

All neurons have three parts:

Synapse
The junction between two neurons (or a neuron and an effector such as a muscle). Neurons are not physically connected to each other. Instead an axon of one neuron comes very close to the dendrites of another neuron where communication between the two can occur by chemical substances called neurotransmitters. This point is called a synapse.

Myelin sheath
insulation around nerve fibers that helps speed-up nerve impulses. Areas of the nervous system that are white have more myelin sheathing and areas that are gray are unmyelinated.

Neurons can be classified into three types based on structure: