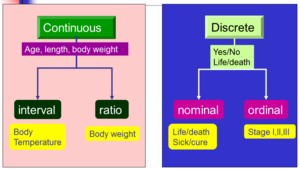 Variables are divided into four types of scales. Knowing which type of scale a variable uses, helps us decide which statistical test to use on it.

Nominal
(aka. categorical) as the name suggests, "nom" meaning "name" in Latin, nominal variables are just a list of names of different things that can't be put into an order, e.g. alive or dead. Sick or cured. Green eyes, blue eyes, black eyes, brown eyes.
Ordinal
exactly like nominal but the list of options can be put in an order. However, unlike interval, ordinal variables don't have equal intervals between each value. e.g. low, medium, high. Rich, poor, very poor, very very very poor. The difference between "rich" and "poor" may be different than the difference between "poor" and "very poor". Another example is GPA. Students with an "A" aren't twice as good as students with a "C". All we know is the order (A is better than B, B is better than C, etc.) but we can't add two C's to get an A.

Interval
an interval variable is similar to an ordinal variable, except that the intervals between the values of the interval variable are equally spaced. e.g. the Celsius temperature scale where 0°C doesn't mean no temperature (Celsius can go below 0°C).
Ratio
similar to intervals but with a true zero (non-arbitrary zero) such as the Kelvin temperature scale where 0 Kelvin means no temperature (there is no such thing as -1 Kelvin). If you are counting something, such as number of patients, then it is also a ratio type of variable, because zero would mean literally nothing.

If you are using interval or ratio scales you use parametric statistics.