H. ducreyi is the bacterial cause of chancroid, an STD characterized by tender, ragged genital ulcers that are variable in size and tender, enlarged lymph nodes. In the United States, chancroid is not common. According to the National Institute for Health (NIH, 2011), uncircumsized males are at greater risk for contracting chancroid. It is easily treatable by antibiotics.

C. trachomatis is an intracellular parasitic bacterium that infects the lining of the urethra, cervix, epididymis, and Fallopian tubes. In the lining of the urethra, it causes the most common form of nongonococcal urethritis (NGU). Chlamydial infections are quite common, especially among teens and young adults, but the infections are not always symptomatic. In women, untreated chlamydial infections can cause pelvic inflammatory disease (PID), potentially leading to infertility or ectopic pregnancies. CDC recommends annual chlamydia screening for all sexually active females 25 and under and for women older than 25 with risk factors such as a new sex partner or multiple partners

Chlamydia can be easily treated and cured with antibiotics. A single dose of azithromycin or a week of doxycycline (twice daily) are the most commonly used treatments. 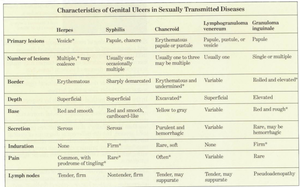 T. pallidum is the bacterium causing syphilis. It usually begins with a single, painless skin chancre (i.e., an ulcer) that appears on the genitals or mouth, which, if untreated, can progress. The progression of the disease is slow but potentially fatal. 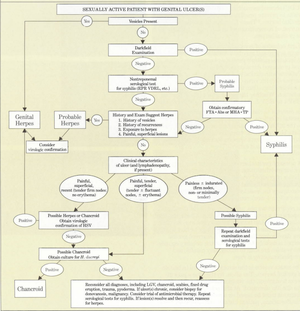 HSV comprises two types, HSV-1 and HSV-2. People who have genital HSV infections can have recurring outbreaks of the disease (genital herpes), which are typically shallow erosions that appear as clusters of vesicular lesions that rupture into painful ulcers. As they heal, herpetic ulcers become crusty. Genital herpes can occur throughout the anogenital and perineal region as well as the mouth in the case of oral sex. People infected with genital HSV can shed the virus and transmit the disease even when they have no apparent skin lesions.

HIV infections deplete the immune system of cells, including a subclass of T lymphocytes called CD4 cells. Eventually, the immune system can become so ineffective that cancers and opportunistic infections (OIs) by other organisms can get a foothold and spread. At this stage, the HIV-infected person is said to have developed AIDS. HIV can be transmitted through sexual contact, and if AIDS develops, the secondary urinary and genital tract diseases that can develop include OIs of the vulva, vagina, cervix, prostate, epididymis, and testis, and cancers of the cervix and testis.

Trichomonas vaginalis. T. vaginalis lives inside cells along the lower genital tract of females and along the urethra and the prostate of males. Symptoms of trichomoniasis are more common in women, where vaginitis is the typical clinical manifestation.

Pubic lice, also called crabs or pediculus pubis, live alongside coarse human hairs on which they lay their eggs (nits). Pubic lice cause itching and skin irritation, and an infestation of pubic lice is treated with topical insecticides

Itch mites cause the skin disease scabies. In scabies, mites burrow into the upper layer of the skin, where they lay eggs and cause a rash and intense itching. Scabies is also treated with topical insecticides. This disease is not confined to genital areas and is usually diagnosed by visual inspection and history